As you may know, the NC State African American Cultural Center is in the midst of its 25th Anniversary year (1991 – 2016) (Congrats!) and I was on the Center website recently when something caught my eye. It was a banner showing the West African Adrinka Symbol Sankofa (“learning from the past” or “return and get it”). I wanted to learn more and found another version to share in this post. 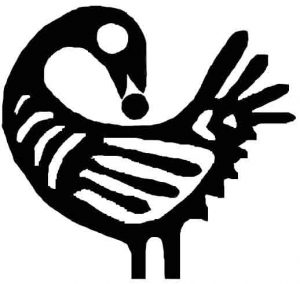 Adrinka are visual symbols developed by the Ashanti people who are native to the Ashanti Region of Ghana. The presentation is of a bird turning around to catch its lost egg with the meaning that it is never too late to turn around and start on a new path once a mistake is recognized.

This idea fully resonates with my work in the conflict resolution field and as the NC State Faculty Ombuds as people can get bogged down in the past. Sometimes people are unwilling to recognize a mistake or are just stuck and, in either case, are not willing to start a new path. Connection with the concept of Sankofa, as I listen to faculty members share situations, I often encourage people to not fully discard the past in order to move forward; instead, use the past and learn from it in order to create a new path.

Thinking about the past and future is also part of the “The Eight Essential Steps to Conflict Resolution” by Dudley Weeks, Ph.D.  Weeks thinks of people in conflict as people in a partnership and that in order to resolve issues, people must work together. He outlines 8 Steps that focus on resolving conflicts and preserve relationships. Step 5 is “look to the future, then lear from the past.”  Weeks takes the idea of Sankofa and turns it around. He asks people and groups in conflict to first consider the present and the desired future, then go back to the past. Weeks explains: “Even though the past does indeed matter, we deny our own power and the power of development and change if we allow ourselves to be defined by the past, to be trapped in perceptions that use past patterns to limit present and future possibilities.” (p 165)

Taken together Sankofa and Weeks’ Step 5 provide a great tool to resolve conflicts. I encourage you to be in your present, then look to the future, and then check-in with the past. What do you want your future to be? Can the past help guide you or do you need new patterns? Good luck and let me know how it works out!